Disneyland Paris is a 2,230 hectare leisure complex in the commune of Chessy, part of the Ville nouvelle Marne-la-Vallée, 32 km east of Paris. Disneyland Paris is not just any amusement park like many otthers all around the world, but a whole theme park resort with a lot of Disney magic.

That’s why Disneyland Paris has not just one amusement park, but two, which are called theme parks. In addition, there is a whole range of hotels, shops and restaurants, a large cinema, a golf course and lots of other attractions. In contrast to most British parks it is possible to spend one or two days at Disneyland Paris without visiting one of the two theme parks and still not be bored.

Young and old alike will get their money’s worth here, because Euro Disneyland was aimed at both children and adults from the start. Michael Eisner opened it on 12 April 1992 with the words “Euro Disneyland is dedicated to the young and the young at heart…” This means that the resort stands completely in the tradition of Walt Disney, who was already interested in creating a place where children and adults can have fun together at Disneyland in California, the first Disney Park ever. With the creation of Disneyland, he succeeded in doing so!

What is it all about at Disneyland Paris?

The main elements of Disneyland Paris are the two theme parks. But that’s not all for sure.

We first enter Main Street, U.S.A. which leads towards the beautiful fairytale castle that is the center of the theme park. Around the castle, in Paris it is the Castle of Sleeping Beauty by the way (Sleeping Beauty Castle or Le Château de la Belle au Bois Dormant), you will find four themed lands: Frontierland, Adventureland, Fantasyland and Discoveryland. In these themed lands you will find the attractions, so the carousels, rollercoasters, dark rides and shows of the park.

The second theme park is the Walt Disney Studios Park, which opened in 2002, ten years after the opening of Disneyland Paris on April 12, 1992. This park is all about the world of film.

You will enter it through a large studio building on the Hollywood Boulevard. From here you can go to the other areas of the park. The Toon Studios are all about the Pixar classics like Cars, Finding Nemo and Toy Story. In Backlot and Production Courtyard, as the other two areas of Walt Disney Studios are named, you have the opportunity to take a look behind the scenes of the film world, and also experience lots of fun and action. These two areas will undergo some big changes over the next few years and, in some cases, will even disappear completely while the Walt Disney Studios get expanded to include a Marvel, Star Wars and Frozen area.

In addition to these two theme parks, there are seven hotels at Disneyland Paris with special themes from the Wild West to Route 66 to the seaside resort on New England’s coast. Additional there is also Villages Nature which is part of the Center Parcs Group, and numerous partner hotels in the nearby Area of Val de France and Val d’Europe.

Between the large hotel complex and the two parks, you will find the Disney Village with many shops, numerous restaurants, some bars and a cinema. There’s also Buffalo Bill’s Wild West Show and PanoraMagique, a Captive Balloon, which offers stunning views of the entire resort and it’s surrounding area.

Close by you will also find the Marne la Vallée-Chessy station, which is not only connected to the metropolitan area of Paris by RER, but also to long-distance trains such as the TGV and Eurostar.

Your online guide to Disneyland Paris
Here you will find a comprehensive free Disneyland Paris travel guide (English / German) on all important topics concerning the Disneyland park just a few miles outside the gates of Paris.

There are currently 71 related links for France listed

Enjoy this Podcast about France 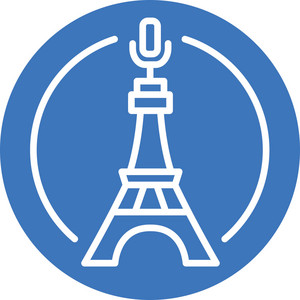 
By Oliver Gee | The Earful Tower is a weekly podcast all about Paris, hosted by Australian expat Oliver Gee. With a huge variety of guests - from cooks and comedians to TV hosts and tour guides - this show will transport you to the City of Lights and make you feel like you've met the characters that make it shine.

Discover the cuisine of France

To the complete overview
Do you like france food?Then bring the taste into your kitchen with simple and delicious recipes

Learning languages for your next Vacation per App

Leave the pocket phrasebooks at home and instead get to grips with reading, speaking and understanding the lingo abroad with just a tap of your phone. This overview includes apps for learning languages for your next travel...

Travel knowledge and advices at a glance

Whether you're a first-time traveler or a seasoned veteran, here's the ultimate list of travel information essential for any traveler - There are currently 15 related links listed...

This is a small preview of travel accessories and tools you might need on the go. We will expand this preview "step-by-step"...

Check out the complete overview...
Affiliate Links/Advertising LinksThe links marked with an asterisk (*) are so-called affiliate links. If you click on such an affiliate link and make a purchase via this link, I will receive a commission from the online shop or provider concerned. The price does not change for you.
Do you think your friends don't know this information yet? Share this with them...

The best of Brittany – France

Provence – 6 lavender routes for every taste

Explore the regions of France

Podcasts about France are also a great asset for travellers

Video tour of every Paris arrondissement

Europe is an interesting and diverse continent. Each of the countries that form Europe has its own unique and fascinating culture and history. Visiting any one of the countries is a wonderful experience as you will find so many things to see and do.

Northern Europe refers to the portion of Europe to the north of Western Europe, the English Channel, and the Baltic Sea; it also includes the Baltic republics.

Western Europe is the western part of Europe; it is bounded by the Atlantic Ocean in the west, the English Channel and the North Sea to the north, and by the Alps in the south.

Eastern Europe is the geographical region east of Germany and west of the Ural Mountains. The United Nations geoscheme lists ten countries including the former Eastern bloc countries, the former Soviet republics, as well as European Russia.

Southern Europe or Mediterranean Europe refers to the mainly subtropical southern portion of the continent. The region is bounded by the Mediterranean Sea in the south. There are 13 sovereign countries in Southern Europe; seven of those states are members of the European Union.

The pandemic has brought many small businesses to their knees. QR-SPOT would like to help them to be actively present on the internet again. Just join our community and ENTER YOUR LINK HERE FOR FREE...

© QR-SPOT.COM | All rights reserved
Trademarks and brands are the property of their respective owners.

We use cookies on our website to give you the most relevant experience by remembering your preferences and repeat visits. By clicking “Accept All”, you consent to the use of ALL the cookies. However, you may visit "Cookie Settings" to provide a controlled consent.
Cookie SettingsAccept All
Manage consent

This website uses cookies to improve your experience while you navigate through the website. Out of these, the cookies that are categorized as necessary are stored on your browser as they are essential for the working of basic functionalities of the website. We also use third-party cookies that help us analyze and understand how you use this website. These cookies will be stored in your browser only with your consent. You also have the option to opt-out of these cookies. But opting out of some of these cookies may affect your browsing experience.
Necessary Always Enabled
Necessary cookies are absolutely essential for the website to function properly. These cookies ensure basic functionalities and security features of the website, anonymously.
Functional
Functional cookies help to perform certain functionalities like sharing the content of the website on social media platforms, collect feedbacks, and other third-party features.
Performance
Performance cookies are used to understand and analyze the key performance indexes of the website which helps in delivering a better user experience for the visitors.
Analytics
Analytical cookies are used to understand how visitors interact with the website. These cookies help provide information on metrics the number of visitors, bounce rate, traffic source, etc.
Advertisement
Advertisement cookies are used to provide visitors with relevant ads and marketing campaigns. These cookies track visitors across websites and collect information to provide customized ads.
Others
Other uncategorized cookies are those that are being analyzed and have not been classified into a category as yet.
SAVE & ACCEPT